Dubrovnik is a city that’s been here way before Game of Thrones. It is not wonder then that so many of its locals frown at the mention of the show. The new visitors to this long time famous travel destination often seem more interested in its TV appearance than in its incredibly rich history spanning almost millennium and a half (to our knowledge). Dubrovnik people have a hefty dose of local pride, so hearing people talk about our city as if it wasn’t relevant in any capacity before one TV show is bound to leave us with bruised egos. Things are not that black or white for me seeing how I am a fan of Game of Thrones myself. I absolutely love having my hometown appearing on screen. At the same time, I’m a history nerd and have made a career out of introducing people from all over the world to Dubrovnik. So, maybe I’m the right person to extend an olive branch to both sides and let you know history lovers and GoT fans are not that different after all.

If you think about it, Dubrovnik shares plenty of things in common with its TV persona – King’s Landing. Here are 5 of them in no particular order:

Ok, let’s start with a popular one. Walk of Atonement is by far the most popular scene shot in Dubrovnik and it depicts Cersei having to go through a public shaming punishment by being forced to walk through the streets of King’s Landing in the nude while being booed and humiliated by the crowd. Dubrovnik had a similar punishment in its past. Dubrovnik’s real walk of shame was not done in the nude. Instead, the sentenced party would be walked through the city sitting backwards on a donkey. All the while there would be a person walking along, shouting out the transgressions one is being punished for. This penalty would be reserved mainly for sexual offenders.

Talking about public morality, The Sparrows appear in the show as an extreme religious cult. They are insanely focused on purity and religious dogmas. This sounds very much like the cult of the flagellants whose members would be seen on the streets of Dubrovnik during the times of great plague epidemics of the 14th century. They used to whip themselves, punishing their bodies for sins of their own as well as others and were aggressive towards those they saw as being immoral.

Dubrovnik was a big centre for international trade, especially in the 15th and 16th century. Its geographical position made it a perfect merchant link between East and West. This, as well as a relatively neutral role it played in the conflict between the Ottoman Empire and Catholic forced of the Mediterranean also made it a key centre for espionage. In fact, Varys, Littlefingers, and early season’s Tyrion most probably had their local doppelgangers in Dubrovnik.

While there is no comparing the biggest city of Westeros with its one million inhabitants with Dubrovnik which counted 6000 souls in the city centre at the peak of its power, both were still bustling cities. Dubrovnik was an important administrative, merchant, and industrial centre, which is why it had efficient city zoning. In King’s Landing for example you have your Street of Flour or Street of Steele – named after the bakeries and blacksmith shops that operated there. In Dubrovnik you have Blacksmith Street (Kovačka Ulica) or Goldsmith Street (Zlatarska Ulica) to name a few, that were named with the exact same logic in mind. 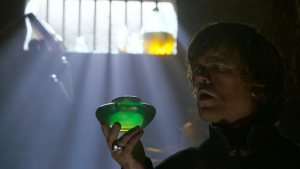 Wild Fire is one of the things seen in Game of Thrones that is usually easily discounted as a fantasy element. However, it is much closer to reality than you think. In the show, it is a highly flammable liquid made by the Alchemists’ Guild to be used in warfare. It was decisive in the Battle of Blackwater Bay and Cersei’s destruction of the Sparrows. Actual weapon of this type was known as Greek Fire or Byzantine Fire and was used by the Byzantine Empire during the early history of Dubrovnik, while the city was under Byzantine protection. It just goes to show, sometimes truth is stranger than fiction.

We love both history and Game of Thrones, which is why we offer options for every type of visitor to Dubrovnik. For those looking to immerse themselves in the exciting history of this city, Insider’s Tour of Dubrovnik is all about the past and the present of this city. Those who are fans of the show and are interested in how and where it was filmed, there is our Game of Thrones Filming Locations Tour, while for all those looking to get the best out of both worlds we’ve created History vs. Game of Thrones Tour of Dubrovnik.